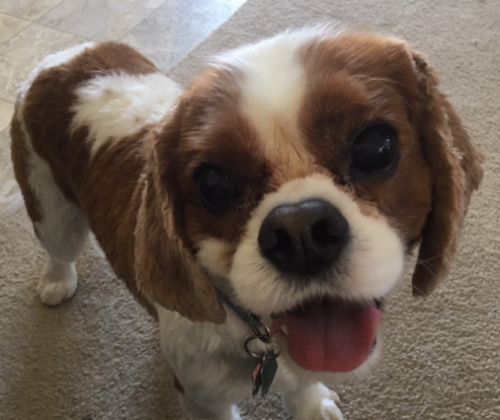 To my Friends at Concord Pet:

I want to thank Concord Pet and the awesome manager at my local store in Milford, Kit Watson.

I have a King Charles Spaniel (Newman) who developed colitis and we weren’t sure why.
Normally happy Newman was lethargic and had to go out 2-3 times a night to relieve himself.
He had several accidents inside which was highly unusual…he simply could not control himself.
We were feeding Newman a “nationally known brand of food” so we decided a change was needed.

I stopped in the Milford Concord Pet store and had the fortune of speaking with Kit.  I told her what was happening, and she suggested I switch Newman’s food to a brand that they carried.  This mixed with pumpkin was doing the trick for my guy, but we weren’t used to paying THAT much for food!
Enter ELM.  I went into the store to buy the weekly food, and Kit mentioned that Concord Pet was introducing their own house branded food, ELM.  Of course, I was skeptical switching foods again…seeing as though we just had every carpet in the house steam cleaned, HA!  Kit grabbed a bag of what we were currently using and compared the ingredient list to ELM…Almost identical, and the ELM was several $ less expensive.
Newman has been loving life and is happy.  His favorite ELM is Salmon, btw. We are happy that we are saving $ with no consequence to Newman’s health…when I think about it, the only person who might not be happy with our change is the carpet cleaning guy!

Concord Pet is amazing! They are willing to help even when they should be closed on a day like today. Thank you doesn't even begin to express the gratitude I feel in my heart for the Elkton store! You may have literally saved my dogs life by being there when you didn't have to be. I didn't get the guy's name but I think he is the owner or store manager, I'm eternally grateful!

I love the Middletown store. They are so helpful with pet advice!

I can not say enough good things about the Concord store in Mount Laurel. The staff is ALWAYS so helpful. My baby girl was recently diagnosed with Diabetes and a friend referred me to Concord Pet food and Supplies. I am so happy she did. The first time I went in I was greeted by Nina and she helped me pick out the best kind of dog food for my baby girl that would help regulate her Blood sugar. I want to say a big Thank you to Nina and the rest of the staff at the Concord store in Mount Laurel.

Added to your cart: